Tamerlane (Timur) Biography & Story from a Shepherd to a Conqueror 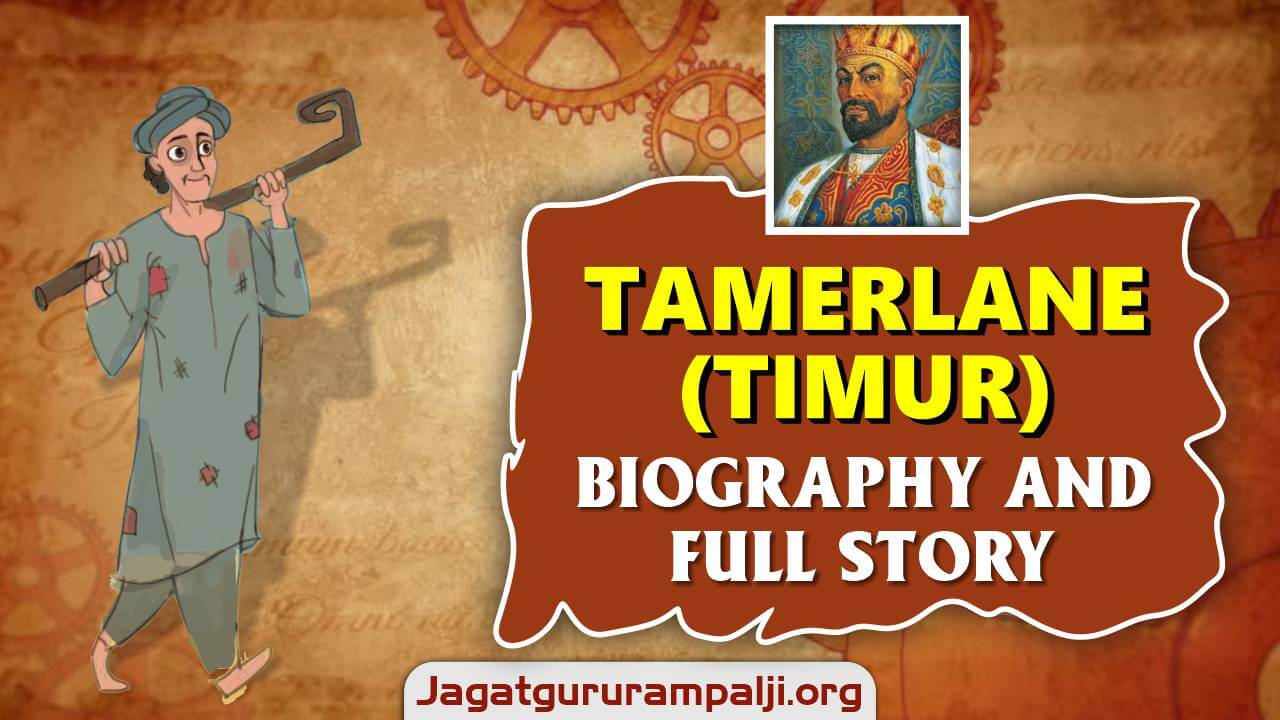 Who Was Tamerlane (Timur)

Tamerlane (Timur) was a poor shepherd born in the 13th century, 1336 A. D. in Shahrisabz in (present) Uzbekistan, central Asia in a Muslim family. His father Amir Taraghay died when Tamerlane (Timur) was a small child. His mother Tekina Khatun raised him alone. Poverty was at its peak, food was scarce in his family. Most of the time they could hardly get one meal a day. Holy scriptures narrate the true-life story of Tamerlane (Timur) from the time when he was an 18-year-old hardworking young boy.

Conqueror Tamerlane (Timur) was not born in a royal family. He was a poor shepherd who used to graze sheep and goats of rich people on rent the whole day in the forest. Those rich people used to feed him. Due to immense poverty, Tamerlane (Timur) also used to make a living by working in the workshop of a blacksmith during the evening after bringing back goats and sheep to the village. This is how the son and mother were leading their life.

God Kabir wanted to see righteousness on the earth therefore, he appeared on earth disguising himself as ‘Zinda Baba’. Although, God Kabir is Omniscient, yet he examines the gesture of the people of this world. Disguised as ‘Zinda Baba’ God Kabir went to many cities, villages asking for flatbread. There was a lack of food, farming was dependent on rain due to which livelihood was maintained with great difficulty. God Kabir came walking in the city in which Tamerlane (Timur), an 18-year-old young Muslim boy used to live with his mother who was a religious woman. Whenever any traveler, monk, or a common man used to come to her door she urges them to eat. She might stay hungry herself but used to make the visitors eat food.

On the day, when God Kabir came with the purpose of the examination; the dough of only one flatbread flour was left for the evening in Tamerlane (Timur)’s house. Both Timur and her mother had eaten food. God met Timur and asked for a flatbread. Tamerlane (Timur) said, ‘Maharaj, you sit and take care of my flocks so that none of them gets lost, I am poor. I feed goats and sheep on hire. I will bring flatbread for you from my house which is nearby’, to which God gave consent and Timur went to his house. Her mother cooked one flatbread and brought it for ‘Zinda Baba’ along with water filled in a pot and offered Him to eat.

While God Kabir was having food, Timur’s mother said, ‘Maharaj! We are very poor, have mercy on us so that we may have some source of livelihood’. After he finished eating, God Kabir took ‘Kaamand’ (a chain used to tie goats) kept aside and thrashed on the waist of Timur seven times, then kicked and punched Timur. His mother thought; since I repeatedly was requesting Baba Ji, therefore, he got irritated and beat Timur. She apologized to God. Then Almighty Kabir said, ‘I hit Timur seven times with the chain, I grant boon for the kingdom of seven generations to Timur in reward for the flatbread you gave me to eat. The kick and punch signify that his kingdom will be later broken into pieces. The mother thought Baba Ji had gone crazy. We do not have the dough for tonight and He says Timur will rule for seven generations. Then Allah Kabir disappeared.

The Spectacle of Almighty Kabir Made Timur Hero in the Village

Note: Actually, this was the divine spectacle of Almighty KavirDev.

Rise of Tamerlane (Timur) From A Poor Shepherd to A Ruler

One night, Baba Zinda (God Kabir) appeared to Tamerlane (Timur) in his dream and told him that “in the workshop of the blacksmith where you work; is treasure beneath. You purchase that, I will inspire the blacksmith. Tell him you will pay the entire amount in 2-3 months”. Timur narrated the whole dream to his mother in the morning. Mother said, “Son! Baba Ji appeared to me in a dream as well. He was telling something but was not properly audible. You go and talk to the blacksmith. Hopefully, our bad days will be over”.

The owner of the workshop, that blacksmith was having strong motivation in his mind for many days that “this place has fallen short. My other place is a big land, even if someone would want to hire this workshop, I will give it. I will install a new workshop in my bigger plot”. Tamerlane (Timur) went to the blacksmith and requested him that he wants to borrow the workshop and will pay the entire amount in 2-3 months to which the owner of the workshop happily agreed since he was even ready to lend his workshop on one-year payment as well.

On the third day, after the deal was finalized the workshop was handed over to Tamerlane (Timur). Tamerlane (Timur), with the help of his mother, built a wall of mud around that place and constructed a hut. They dug that place as was told by Zinda Baba (God Kabir) and found a lot of treasure. God again appeared to Tamerlane (Timur) in his dream and told him to “use some treasure and purchase a horse be it at any cost. Do not focus on gaining profit or loss. The people will consider that your work is going well and you are earning good”.

Tamerlane (Timur) followed all the instructions of God Kabir and in six months his financial condition rose to the extent that he purchased new land. He purchased a lot of goats, sheep, and horses and tied them in his new land. Timur Lang hired some young boys as his servants, also he got a big house constructed.

The abduction of the young girl by the soldiers had made Tamerlane (Timur) vindictive for the King since that incident was alive in his mind and he had a strong desire that if he will become the king, then, first of all, he will kill the criminal shameless King who looted the honor of my village and kidnapped the young girl.

Tamerlane (Timur), by then had become a millionaire. He had established a workshop in the jungle since he was an artisan himself he started making swords. He told his purpose to the young men of the village that he wanted to teach a lesson to the king who looted the honor of his village daughter. “I will prepare an army, whosoever wants to join the army will be given Rs.1/- as salary”. At that time Rs. 1 ie. one silver coin had great value. Many young boys agreed, they even made their relatives join the army and earned a livelihood. Tamerlane (Timur) hired many blacksmiths and gave them a salary who prepared swords and shields. In this way, a huge army was made.

The First Invasion of Tamerlane (Timur)

All set, Tamerlane (Timur) with his huge army finally attacked the King and took him under his control. He took away King’s entire kingdom. He did not kill the King, rather set him free and sent him to another village and started providing him remuneration for his subsistence.

God Kabir met Tamerlane (Timur) again in disguise when he was 80 years old. He was the ruler and had gone hunting. God explained to him, ‘King! do devotion else you would fall into hell. You forgot the day when you only had a single flatbread at home. At that time, Tamerlane (Timur) fell at the feet of Zinda Baba and took initiation. He gave the kingdom to his son. After that, Timur lived for 10 more years. That soul is in the cycle of birth and death, but the seed of devotion had been sown.

God Kabir explains that if Timur was told to worship in that same poor condition then he would not have agreed.

Important: Only God Kabir knows how a creature can be removed from the grip of devil Kaal.

Whatever might be the religion those who are the promoters of that religion are pure at heart and possess clean behavior. They are religious, honest, and fear God, the same as Tamerlane (Timur), who when invoked by Zinda Baba took refuge immediately and started worship. Later, whatever happened was merely a show. A Satguru (true spiritual leader) ie. an enlightened saint/Illamwala reforms religion again and imparts a true way of worship.

Merciful Almighty Kabir remains with the soul whosoever comes in His contact even once in a lifetime and assures of his/her emancipation. The above-mentioned fact about Tamerlane (Timur) has been revealed by the great enlightened Saint Rampal Ji Maharaj which was unknown to the masses to date.