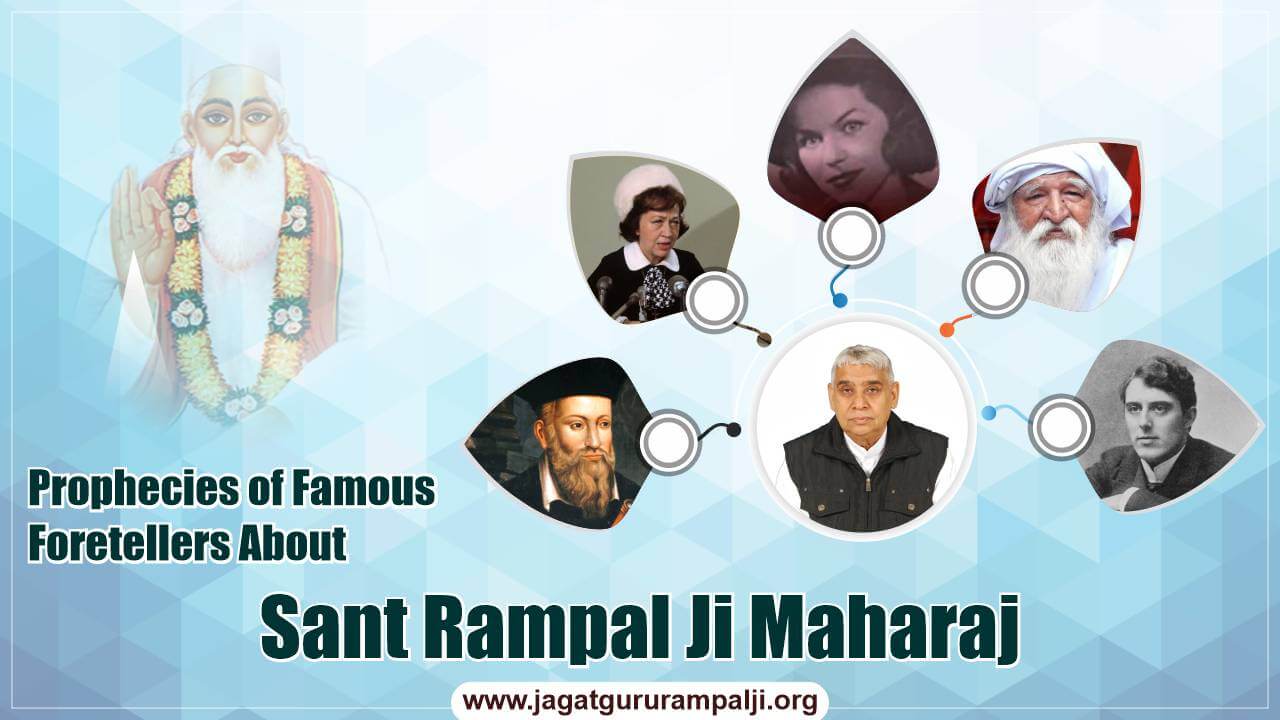 1. England's astrologer, Chiero, had predicted in a book written in 1925 - Only a saint born in the latter half of the 20th century i.e. 2000 A.D. (after year 1950) would bring 'a new civilisation' in the world, which would spread in the entire world. That one person of India would bring a revolution of knowledge in the whole world.

2. According to the foreteller "Mr. Vegiletin", in the latter half of the 20th century, the absence of mutual love, degradation of humanity, a race to collect wealth, loot and the unjust politicians etcetc various disasters would be seen. But a new civilisation based on peace and brotherhood originating from India breaking the boundaries of country, state and race would give rise to peace and contentment in the entire world.

3. According to the woman astrologer from America, "Jean Dixon" before the close of 20th century, there would be a great massacre and destruction of mankind in the world. After the ideological war, a new civilisation based on spiritualism would probably originate under the leadership of an Indian man from a rural family and would send off the wars from the world forever.

4. According to "Mr. Anderson" of America, before the close of the 20th century or in the first decade of the 21st century, there would be nude dance of uncivilisation in the world. In between, a religious rural Indian, preparing a constitution on the principles of one human race, one language and one flag, would give the lesson of morality, generosity, service to mankind and love. By 1999, this Messiah will impregnate the entire world with religion, happiness and peace for the forthcoming thousands of years.

5. According to an astrologer from Holland "Mr. Gerard Crise", before the close of 20th century or in the first decade of 21st century, as a result of a terrible war, the existence of several countries would be erased from the face of the world. But a great man from India would tie the whole world in a single bond of humanity and would forever eradicate violence, schism-misconduct and fraud etc from the world.

6. According to "Mr. Charles Clarke", an astrologer from America, before the end of 20th century, one country, India, would overcome all other countries in the field of science, but the fame of India would be specifically from her religion and philosophy, which the entire world would adopt. This religious revolution would influence the entire world in the first decade of the 21st century, and would force man towards spirituality.

7. According to a woman astrologer from Hungary "Boriska" - before the year 2000 in between fierce circumstances - murders and plundering - human virtues would be developed into an everlasting form by an Indian prophet as a result of his successful struggle against materialism. This spiritual person would have a very large following of the common people, who would convert materialism into spiritualism.

8. According to Dr. Zulvoron of France, after the 1990 A.D., the European countries would quickly lean towards the religious civilisation of India. By the year 2000, the population of the world would be around 640 crore. The religious revolution of knowledge emanating from India, after destroying atheism, would cover the entire world like a tempestuous storm. The followers of that great spiritual man will soon in the form of an organisation by 'self-power' would have influence upon the entire world.

9. According to Nostradamus, the French astrologer, after the army revolutions in the entire world only a small number of people will make the world better, whose great religious world-renowned leader at the end of 20th century and at the beginning of 21st century, taking birth in an eastern country will tie the whole world with the bond of unity through brotherhood and courtesy. (Nostradamus is proving in Century 1 Quatrain 50) - That great saint would be born in the island surrounded by ocean from three sides. At that time, because of absence of Tatvgyan (complete spiritual knowledge), there would be darkness of ignorance. There would be tumult after the decline of morality. That Chyren (Religious Leader) would worship Guruvar i.e. regarding Guru ji as 'Var' (most honourable) and would make others do the same. That religious leader (Tatvdarshi saint) with the power of his religion i.e. with power of bhakti and through Tatvgyan would overpower all the nations. Stopping him in Asia i.e. obstructing his propagation will be madness (Century 1 Quatrain 50).

10. According to Professor Harare of Israel, a divine greatman of India with humanitarian thoughts would make the roots of spiritual revolution strong before the year 2000, and the entire world would be bound to listen to his thoughts. There would be presidential rule in most states of India, but later on the leadership would be on brave devout people, who would be dependent on a religious organisation.

11. According to the prophecy of Shri Anandacharya of Norway, after 1998, a powerful religious organisation would come to light in India, whose master's, a householder's, code of conduct would be followed by the entire world. Gradually, India would lead the world in industrial, religious and economic terms and only its science (True spiritual knowledge) would be acceptable to the whole world.

12. In the book 'Golden light of new era' its writer Florence talks about a person which she used to see in her meditation. She mentioned His appearance that He is not having a moustache and beard and is fair skinned with white hair. She said that rays from heaven constantly fall on Him. She says that this sage can even bring a natural change like He can avert the natural calamities. He is trying to make Earth a better place so that heaven can be made here.

13. In the Book Janam Sakhi Bhai Bhale Wale which contains the stories related to Guru Nanak Dev, Prahlad made a prediction that after many centuries after Guru Nanak Dev a Saint equivalent to him would born in the Jatt community.

Today incidents are happening in the world according to the above-mentioned predictions. Change of the era (yug) is a hard and fast rule of nature. According to Vedic philosophy, there are four yugas - Satyug, Tretayug, Dwaparyug and Kalyug. When there is a sole empire of sinners in the world, then God appears on earth in human form.

From time immemorial, India only has done this work of complete development of mankind. The incarnations have been descending only on this holy earth since eternity.

But what an irony it is that in the life time of seers-sages, great men and incarnations, the rulers and the public of that time did not pay an attention to their divine speeches and philosophies, and on their disappearance started worshipping them with double the excitement. It is also ironical that we do not listen to them when they are alive and contemporary, rather keep on opposing and insulting them. Some selfish elements by misleading the public vilifying the supreme saint become obstacles. This strategy has been a characteristic of every era (yug) and is happening even today.

A great man who enduring thousands of hardships remains firm on his penance and truth, his words can never be wrong. Being firm on his truth, Jesus Christ endured the terrible pain of nails in his body, Socrates drank the bowl of poison, Shri Ram and Shri Krishna ji also had to be victims of torments.

Jesus Christ had said that - "Earth and sky can pass away; it is a permanent rule of sun - to rise and set, even that can be cancelled, but my words can never be wrong."

Gentlemen! If today's crore men, finding that saint, who is the knower of the supreme knowledge, accepting him, would improve their way of life according to the path directed by him, then there would be an environment of goodwill, mutual brotherhood, compassion and true (bhakti) devotion in the whole world. Today's human is intelligent; therefore, would definitely accept that saint's viewpoints and would be blessed. That Saint is Jagatguru Tatvdarshi Saint Rampal Ji Maharaj. Please read the brief life history of Saint Rampal Ji Maharaj which is fulfilling all the prophecies.