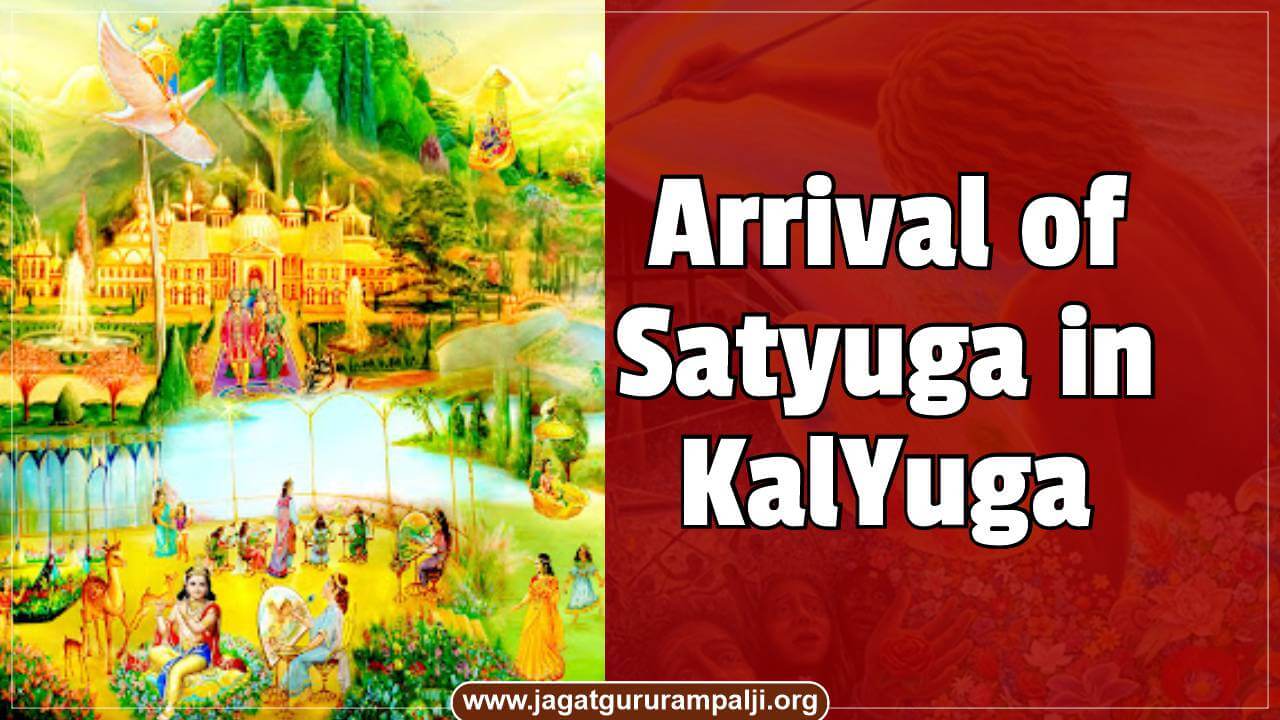 Satyayug is said to be that time i.e yug in which there is no immorality. There is peace. A son does not die before the father; a woman does not become a widow. Body is free from illness. All the human beings do bhakti. They are fearful of God because they are familiar with all the acts of spiritual knowledge. They do not inflict suffering to anyone by mind, action or word and are not wicked.
Men and women are jati (A married man who is loyal to his wife, and does not even think of another woman in his dreams) - sati (A married woman who is loyal to her husband, and does not even think of another man in her dreams). There is abundance of trees. All the human beings do bhakti based on Vedas. Presently, it is Kalyug. Unrighteousness has increased in it. In Kalyug, the faith of human beings towards bhakti reduces. Either they do not do bhakti, or if they do, then abandoning the injunctions of scriptures do arbitrary bhakti, which is forbidden in Adhyay 16 Shlok 23-24. As a result of which the benefit, which is desired from God, is not obtained. Therefore maximum people become atheist. To become rich, they acquire means of bribery, theft, and robbery. But because of this not being the way to become rich, they become guilty of God, and bear natural disasters. Man forgets the law of God that one can not obtain more than what is destined. If one acquires wealth by illegal means, then it will not remain. Like, a man acquired wealth by illegal means to see his son happy. After a few days, both the kidneys of his son got damaged. Somehow he got the kidney replaced. He spent 3 lakh rupees. The entire wealth which he had earned by illeagal means got spent, and also went in debt. Then he got the boy married. After six months, his only boy got killed in a bus accident. Now neither did the son remain, nor the money earned by illegal means. What was left? The sins incurred in accumulating that money by illegal means are still balance. To bear them, whoever's money he had extorted, he will return it by becoming their animal (donkey, bull, cow etc). But Supreme God changes the destiny of a devotee who does scripture-based bhakti of Param Akshar Brahm because it is written in Supreme God's qualities that God makes a pauper rich.

In Satyayug, no one consumes meat, tobacco, and alcohol because they are familiar with the sins incurred from these.

It is a sin to eat meat

Once upon a time, a saint along with his disciple was going somewhere. There a fisherman was catching fishes from a pond. The fishes were squirming and dying outside water. The disciple asked, "Oh Gurudev! What punishment will this sinful man get?" Guruji said, "Son! I will tell you when the time comes." Four-five years later, the guru and the disciple were passing from a jungle to go somewhere. There an elephant calf was crying. While bouncing and jumping around, the elephant calf had got stuck in between two trees grown next to each other. It did get out but on trying to escape, its entire body had got grazed and it had got wounds on its body. It had worms crawling all over its body, which were pinching its body. That elephant calf was screaming badly. The disciple asked guru ji, "Oh Gurudev! Of what sin is this creature bearing punishment?" Gurudev said, "Son, this is that same fisherman who outside that city was taking fishes out of the pond."

How much sinful is it to consume alcohol?

One who drinks alcohol has to take seventy births of a dog. It wanders around eating faeces and urine. He has to bear many other hardships, and alcohol also causes various damages to the body. There are four main parts of the body - lungs, liver, kidney and heart. Alcohol causes damage to all these. After consuming alcohol, a man instead of behaving like a human being starts behaving like an
animal - falling in mud, defecating, urinating or vomiting in one's clothes.

Loss of money, loss of reputation, unrest at home etc occur due to consumption of alcohol. Alcohol is not used in Satyayug. In Satyayug all human beings are familiar with the law of God. As a result of which, they lead a happy life.

How much sinful is it to commit adultery?

Worshippable Supreme God Kabir ji has told that a man, who commits a wrong act with another woman, bears seventy births of a blind. A wise man never brings such misfortune upon oneself needlessly. Only a fool does such an act. Like, putting hand in fire is like calling upon death. Like, if a person put s seeds in someone else's field, then he is a big fool. A wise man can never do so. Going to a prostitute is like throwing a precious bagful of wheat on rubbish. A wise man would never perform such an act. Either a big fool or an alcoholic shameless person can only do this. It is a matter of consideration that a substance which on being destroyed from the body gives joy, if it is kept safe in the body, then how much joy it will give! It provides longevity, healthy body, healthy mind, valour and vigour. A substance through which a precious child is obtained, its destruction is equivalent to killing a child. Therefore adultery and unnecessary sexual intercourse is forbidden.

How much sinful is it to consume tobacco?

Like it has been mentioned above that a person who drinks alcohol once bears seventy births of a dog, and then eats and drinks faeces and urine. One who performs sex with another woman bears seventy births of a blind. Even one who consumes meat bears intense hardships. The sins incurred by one who commits the aforesaid sins 100-100 times, is what is incurred by one who only assists a person consuming tobacco once. What sin will be incurred by those who consume tobacco - hukka, cigarette, beedi, or consume tobacco in any other form? That person will incur heinous sin. When a person, who consumes tobacco, emits smoke on smoking hukka, beedi or cigarette, then that smoke entering into the bodies of his small children causes damage. Then those children adopt vices quickly, and their health also deteriorates.