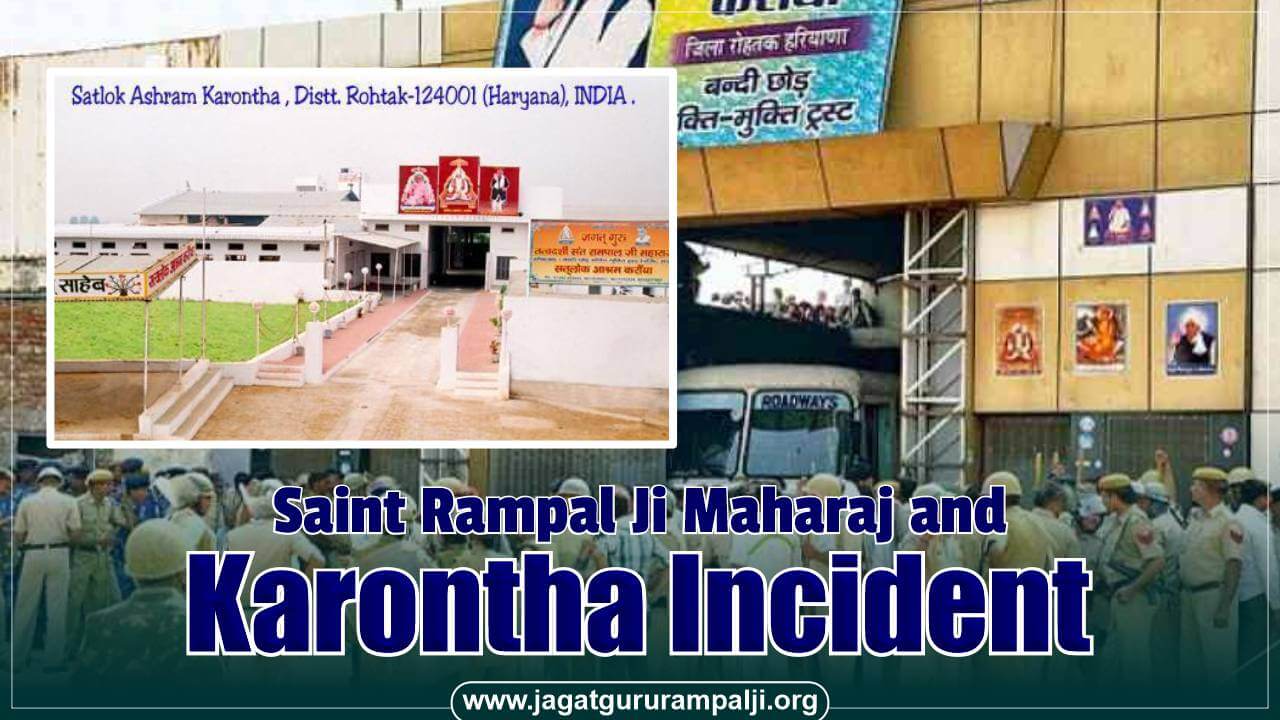 In the year 1993, Swami Ramdevanand Ji Maharaj ordered you to do satsang and in 1994, gave you order to give naam (mantra / spiritual instruction). Because of being engrossed in the path of bhakti, you gave your resignation letter from the post of J.E., which is accepted by the Haryana Government in letter no. 3492-3500, dated 16/5/2000. From the year 1994 to 1998, Saint Rampal Ji Maharaj did satsang by going to every house, every village and every city. Large number of people became his followers. Simultaneously, the revolt from the unknowledgeable saints also escalated. In the year 1999, established Satlok Ashram Karontha in Village Karontha District Rohtak (Haryana), and by organising a seven-day long satsang from 1 June 1999 to 7 June 1999, on the occasion of the manifestation day of Parmeshwar Kabir Ji, commenced the Ashram and started a three-day long satsang on the full-moon day (Purnima) of every month. Devotees started coming to hear the satsang from far-off places and after understanding the Tattavgyan, started becoming disciples in large numbers. Within a few days, the number of the followers of Saint Rampal Ji Maharaj reached in lakhs.

1. Regarding the purchase of the land of Satlok Ashram, Karontha:

Its truth is as follows- The sister of the person, who was the seller of the land, was pregnant. She couldn’t come to the tehsil. So, he instead of his sister’s photo, pasted the photo of his paternal aunt (bua) and presented her as his sister. He hid this entire act from the members of the trust who were buying the land. The Community Headman (Nambardar) witnessed that all the members are present. What is the fault of the buyers in it? Sant Rampal Das Ji Maharaj does not even have his signatures anywhere on the documents of the purchase, nevertheless Sant Rampal Das Ji Maharaj and the members of the trust have been made guilty in this false case.

2. The False case of fight with the Chhudani Ashram:

3. The False case of murder:

Being misled by the conspirators, the anti-social elements attacked Karontha Ashram. Of those attackers, one died because at that time the attackers were also firing, the police was also firing, and rounds were being fired in air from the ashram as well in self-defence. He did not die of the bullet fired from the ashram’s firearms because the investigation done by the Government from the Forensic Science laboratory (FSL), Madhuban, Karnal has proved that - this person has not died from the firearms of the Ashram. Many followers of Sant Rampal Das Ji Maharaj had gone to the ashram to listen to the discourses. All of them were present there, so the statement that the Saint weilded a firearm is completely fabricated.

It is God’s rule that “Pure gold does not fear the flame”. Such injustice and oppression is being done by some contemporary politicians and corrupt officials. Some corrupt judges are even tarnishing the image of the court of justice. Even in Supreme Court and High Court some selfish judges are doing injustice for their self-interest. Even they, instead of justice, have only done injustice.