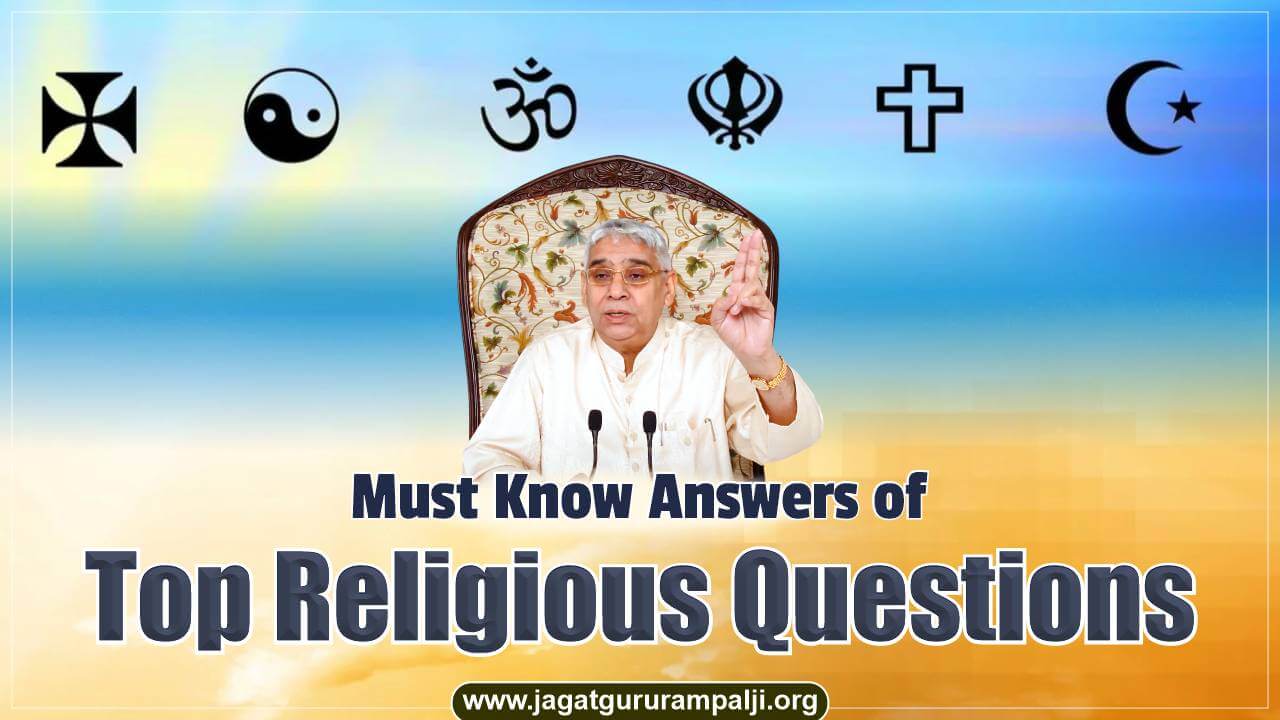 1. Who are the Mother and Father of Brahma, Vishnu and Shiv?

So far everyone had considered Brahma, Vishnu and Shiv to be eternal. This was purely based on hear-say information which had travelled down generations as no one could comprehend the holy texts properly. Sant Rampal Ji has proved that Mother Durga is the Mother of Brahma, Vishnu & Shiv / Shankar and God Kaal is their Father. He has shown evidence in Shrimad Bhagavad Gita and Shrimad Devi Bhagwad Puran (Durga Puran). The speech of God Kabir pertaining to the creation of the universe explicitly elaborates on the birth of Brahma Vishnu and Shiv which is available to us as Kabir Sagar. Sant Rampa Ji has clarified the concepts in there too. Readers can learn more by reading about the creation of nature.

There is no doubt in the fact that Goddess Durga is the mother of Brahma, Vishnu and Shiv. But the mystery remained over who was their father. In other words, who is the husband of Mother Durga? Sant Rampal Ji has revealed from Durga Puran that God Kaal is the husband of Mother Durga. Please read Shrimad Devi Bhagwat Puran to gain further information.

3. Which God has a selfish interest in our birth and death?

All souls are trapped on this earth, which is a planet in Kaal's 21 universes. Humans are in a perpetual cycle of birth and death. Readers need to learn about the creation of nature to understand the situation of these 21 universes and their relevance to the larger picture of creation as a whole.

As God Kaal incurred a curse of consuming 1 lakh human beings ever day, he doesn't want any soul to escape from his universes as we are his food. Therefore it is in the interest of Kaal that souls do not achieve salvation and thus depart to satlok. To ensure this, Kaal has formed numerous traps in his universe to keep the soul entangled in his web. Read more about who is Kaal. This Kaal has been addressed as Satan / Shaitan / Devil in other religions.

4. We do so much worship of all the gods-goddesses, then why are we still distressed?

Only the worship of the Supreme God can destroy our sins. Otherwise one continues to incur the results of bad deeds done in previous lives and thus remains distressed. Read about why people become atheists to understand this further.

The long and short of it is that because everyone is doing incorrect worship, they are not able to reap the benefits of it as all their efforts are in vain. Hence they remain distressed despite appearing to be doing some sort of worship.

5. Whose bhakti (worship) do Brahma, Vishnu and Shiv do?

The essence of this question is that Brahma, Vishnu and Shiv worship some other God. Goddess Durga in Shrimad Devi Bhagwat guides them into worshipping Kaal by reciting the word 'Om'. Read the essence of Devi Bhagwat Puran.

6. What is the identity of a Complete Saint? And how will we attain complete salvation?

7. Is God in form or formless?

Find about in detali about the form of God in

8. Is salvation possible by going in the refuge of any Guru?

Likewise, Bhagavad Gita Adhyay 18 Shlok 62 - 66, gives a message to go into the refuge of some other God i.e. the God different to the one giving the knowledge of Gita. Read more from Bhagavad Gita.

9. Is it beneficial to go to places of pilgrimage, to keep fasts, to offer libations of water to gods, to carry out shraadhs etc? (According to Gita ji)

There is no benefit of going to a pilgrimage as it is an arbitrary way of worship and is against the teachings of Shrimad Bhagavad Gita. Read more about places of pilgrimage.

Keeping fasts is also a useless practice with no benefit. Shrimad Bhagavad Gita is strictly against keeping fasts.

10. Shri Krishna ji was not Kaal; then who is the Kaal of Gita?

Shri Krishna ji is 'Satoguni bhagwan' whereas Kaal is not kind. God Kaal is the one who gave the knowledge of Bhagavad Gita. Read in full detail about Who is Kaal. Also read about Shri Krishan Ji whether he is Supreme God or not.

11. Who is Supreme God? What is He like? Where does He live? How is He attained? Who has seen Him?

Kabir Sahib is Supreme God. He has a human form. He lives in Satlok / Sachkhand / Satdhaam / Eternal Place. He can only be attained by true undivided devotion after getting initiation from a Complete Saint. He himself met his pious souls and imparted them his true knowledge. Read detailed information with all the evidence.

12. Can happiness or salvation be attained by Meditation or by recitation of (naams) mantras like Ram, Hare Krishna, Hari Om, Hans, three and five naams and Wahe Guru etc.?

The straight answer is 'NO'. One cannot achieve any benefit by doing meditation or recitation of mantras like 'Ram Ram', 'Hare Krishna' 'Hari Om', etc. as they are all arbitrary and thus useless. They are nowhere mentioned in Bhagavad Gita or Vedas. Likewise, Gita is against any type of forced meditation.

13. Who is the Great Saint according to the famous foretellers?