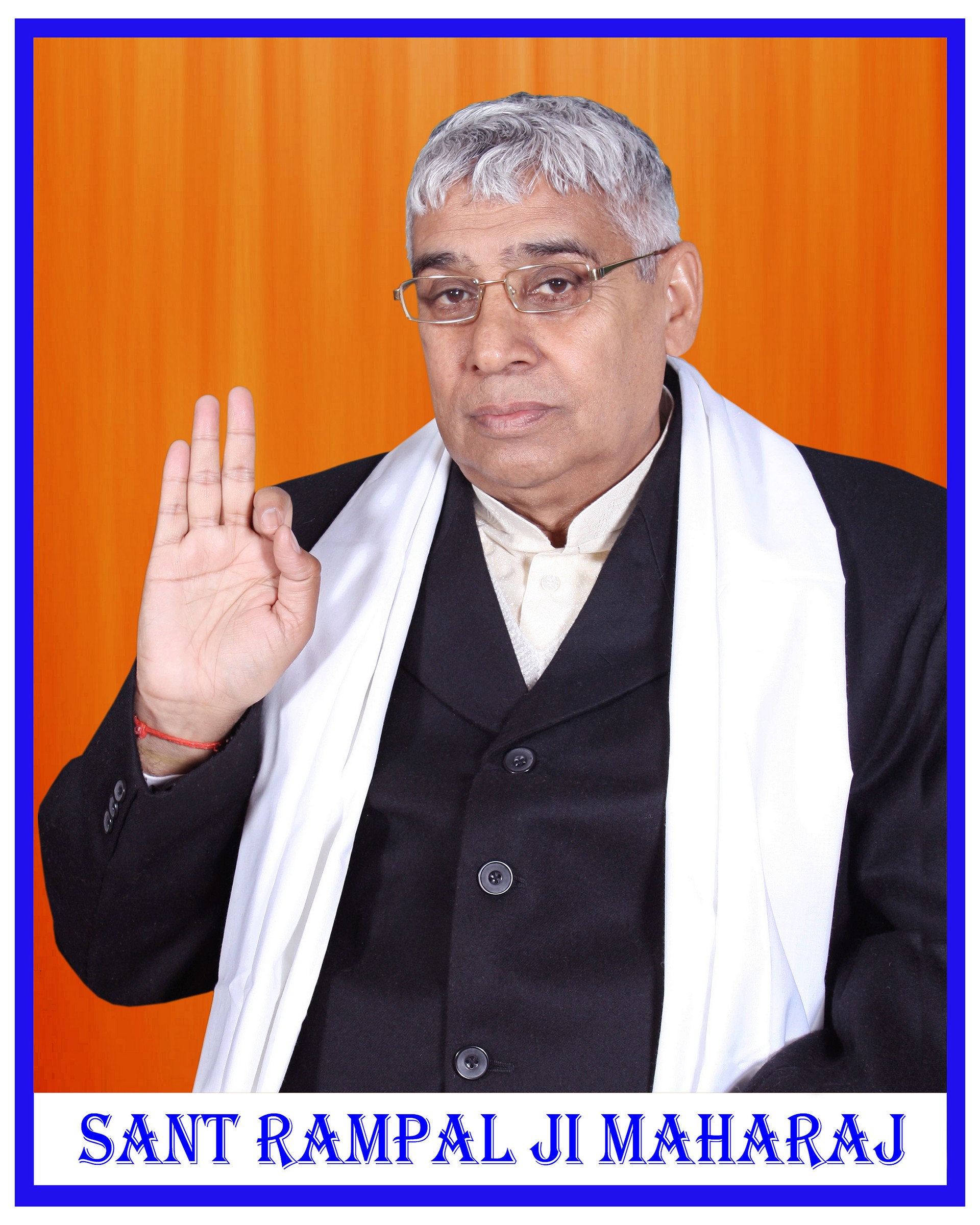 Satguru Rampal Ji Maharaj was born on 8 September 1951 in Village Dhanana, Tehsil Gohana, District Sonipat (Haryana) in a family of farmers. His father’s name is Bhakt Nandram and mother’s name is Bhaktmati Indradevi. Maharaj Ji after obtaining a diploma in Engineering was appointed as a J.E. in the irrigation department of Haryana Government. Since childhood you are of a religious nature. For 25 years, you continuously worshipped Hanuman Ji. Everyday recited Hanuman Chalisa seven times, and consecutively for eighteen years went to a famous temple of Hanuman Ji in a village Salahsar in district Churu in Rajasthan to do worship. Along with this, you also used to consider Shri Krishna Ji as your deity. You did not use to consider any other god greater than him, and also used to domestically worship Khatu Shyam Ji. You used to meditate for hours. Even after doing all these religious practices, neither did you see and meet God nor attained physical well being and mental peace. You were always meeting sadhus and mahatmas with the burning desire of attaining God.

One day, you met a 107 years old great Kabir Panthi Saint Swami Ramdevanand Ji Maharaj. You asked Swami ji that how can one achieve God and acquire mental peace? Swami Ji asked that what religious practices do you follow? You said that I keep fast, go to temples and worship Hanuman Ji, Shri Krishna Ji and Shyam Ji. I celebrate all the festivals and also perform shraadhs etc. Then, Swami Ji told you that the religious practices you follow are neither for attaining God, nor can give you mental peace. Kabir Sahib Ji has said in His sacred speech that: -

Swami Ji said that by following these religious practices, neither do the blows of destiny finish, nor does one get mental peace, and nor does one attain complete salvation. Because these religious practices, instead of being that of the Purna Parmatma , are a false web spread by Kaal Niranjan (Brahm). God Kaal Niranjan is the master of 21 brahmands who is also known as Jyoti Niranjan, the formless God (Brahm) in the Vedas. His wife’s name is Ashtangi (Prakriti / Sheraanwali) Maya and his three sons are Brahma, Vishnu and Mahesh. These five conjointly have misled the living beings by their Yogmaya (illusion) and have veiled the bhakti (devotion) of the kind Supreme God, SatPurush. As a consequence, they make people worship them. But by worshipping them, the blows of one’s fate cannot be terminated and one has to bear the results of one’s actions. Good actions in heaven, and bad in hell, and then one goes in the births of 84-lakh species of life. Satguru GaribDas Ji Maharaj says in his speech that: -

Swami Ji told you that above this Brahm (Kshar Purush) there is ParBrahm and above ParBrahm, there is Purna Brahm (Param Akshar Purush), God SatPurush. By worshipping SatPurush, the blows of fate finish and one gets mental peace and attains complete salvation. When you heard all these things, your mind became confused because you had never heard these things before. You accepted Swami Ji’s talks to be true and on 17 Feburary 1988 took Naam Updesh from him.

Once, Swami Ji, when 16 years old, was grazing animals outside the village. He met a Kabir Panthi Mahatma. Mahatma Ji inspired Swami Ji to do bhakti. Swami Ji got extremely motivated by Mahatma Ji’s inspiration and realising that one does not get a human life again and again, immediately took off his clothes and threw them there in the jungle, wore other clothes and went away with Mahatma Ji. Since that day, Swami Ji had never returned to his home until today. His family members on finding Swami Ji’s clothes in the jungle had thought that he has been eaten by a wild animal. They considered him dead from that day and started carrying out his shraadhs. Swami Ji’s sister-in-law (bhabhi) told you that she had herself carried out 70 shraadhs of Swami Ji. After this incident, your life was transformed. You thought that this act of carrying out shraadhs and worshipping idols is all useless.

Once, you had gone to your relatives. There, while having food, you gave a chapatti (roti) to a dog standing nearby. That dog instead of instantly eating that roti, took it away and buried it in a nearby heap of waste. You carefully watched everything. Next day, in the morning that dog took out that roti, which was buried in the heap of waste and had become dry, and started eating it. You were having tea at that time. You carefully watched that dog and told this incident to your relative. The relative said that this dog never eats roti on a Tuesday. Yesterday was Tuesday; therefore, he had buried the roti in the waste, which he is eating now. You thought that this dog must have fasted a lot when in human life, because of which he still remembers fasting, but this fasting has put him in the births of 84-lakh life-forms and made him a dog.

To find out the truth, you started doing sumiran of the ‘Naam’ given by Swami Ji and simultaneously started studying all the holy scriptures.

You studied Shri Mad´Bhagwad´Gita, Kabir Sagar, ‘Sat Granth Sahib’ created by Saint GaribDas Ji Maharaj, all the Purans, and the sacred speeches of all other saints. By studying these, you found that whatever Swami Ji had told you, their evidence was also present in Purans and Gita Ji. In Gita Adhyay no. 14, Shlok no. 3 to 5, Kaal Niranjan says that this Prakriti is my wife and the mother of all the living beings i.e. is the mother of the world and I am the father who places the seed in her womb. The three Gunas (Rajgun-Brahma, Satgun-Vishnu, Tamgun-Shiv) born of Prakriti keep the soul bound to a body. In Adhyay no. 3, Shlok no. 14-15 also, it is written about Purna Brahm that all the living beings arise from food grain, food grain arises from rain, rain from yagya (sacrificial ceremony), yagya from auspicious actions, actions/deeds have been inflicted by Brahm, and Brahm has arisen from the Eternal God, and even the fruits of yagya are obtained from Param Akshar Parmatma (Supreme God) only. Likewise, it is also written in DeviBhagwad´ Mahapuran, Third Skand that Ashtangi Aadi Maya (Prakriti/Durga) is the mother of the three gods (Brahma, Vishnu and Shiv) and Jyoti Niranjan is their father. This nature is being run by them only. It is written in Shivpuran’s Sixth Adhyay that the three gods were born from the sexual intercourse of Mahashiv and Shiva. Here Mahashiv is Jyoti Niranjan-Brahm (Kaal) and Shiva is Prakriti (Durga) i.e. Aadi Maya. It is written in Vishnu Puran that the real form of Vishnu is Kaal. In Gita Ji, Adhyay no. 11, Shlok no. 32, Brahm (Jyoti Niranjan) himself is saying that I am Kaal.

After taking ‘Naam ’ from Swami Ji, you did intense jaap of Satnaam and Saarnam. As a result of which, you saw and met Purna Brahm Kabir Sahib and realised the truth. After this you started experiencing mental peace and extreme happiness all the time. 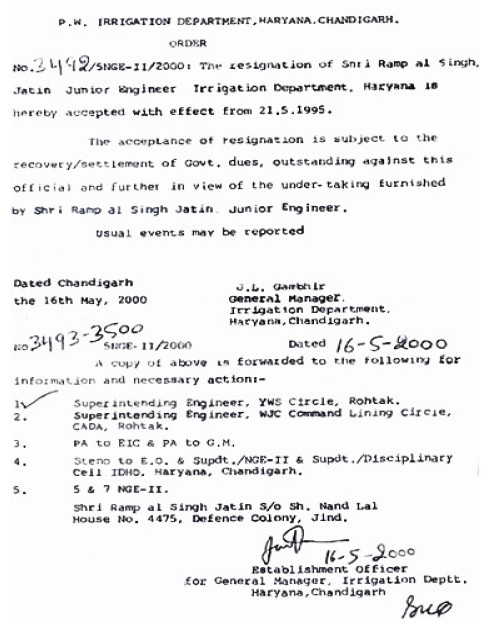 In 1994 Swami Ramdevanand Ji Maharaj ordered you to give Naam-Daan (initiation). Considering the responsibility of Naam-Daan as your foremost duty and to fulfil it, you started explaining to people by going to their houses in various villages and cities. You became so busy that you had to leave your job after having worked for 18 years, so that the people could be shown the true path. After taking Naam-Daan from you, the devotees (Bhakt) started getting worldly happiness and spiritual experiences.

Seeing them, the distressed started coming to you and started requesting you to eradicate their sufferings. You explained to them that I do not use any jantra-Mantra or jhaada (casting out a sickness or an evil spirit by means of charms or incantations). I only give Updesh (spiritual instruction) of God Kabir’s Satnaam. You will have to take Updesh. On this, some people said that we have already taken updesh from a very big saint who has lakhs of followers and we also sit in meditation for hours with full faith. But we haven’t achieved any worldly happiness or spiritual experience. On this Maharaj Ji (Saint Rampal Ji) explained to those appellants that those who have ‘Satnaam’ updesh, and who do its jaap with full faith, all of their miseries disappear and they attain peace of mind. Kabir Sahib says that: -

When you asked them about their Naam Updesh, you found that they have been given a wrong naam which is not evident in any of the saints’ speeches or scriptures. That which is called ‘Satnaam’, its evidence can be found in God Kabir’s, Saint DharamDas Ji, Saint GaribDas Ji, Saint Gheesa Ji, Guru Nanak Ji, Saint Dadu Ji etc saints’ speeches, which is done with surati-nirati (concentration-attention), man (mind) and pavan (breath) and is also known as ajappa jaap (repetition of mantra which is not spoken but is done by breath). By doing this, one sees and meets God in form and the worldly sufferings are also removed. You (Satguru Rampal Ji) tell that the Master of all is one God and the path to complete salvation is also one. By not accepting that path, gods, humans and sages, all keep bearing the results of their actions in this Kaal Niranjan’s lok and do not achieve complete salvation. If one has to achieve salvation of this lok, then also to achieve it there is only one path for everyone, which is very difficult without knowledge.

God Shankar’s wife, mother Parvati, even after living with Shiv Ji for 108 births, did not become free from the cycle of life-death. One day, she met Narad Muni (sage) and he said that mother, you repeatedly go into womb and bear extreme hardships. Why don’t you make God Shiv your Guru and ask him the way to achieve salvation. On Narad Ji’s persuasion, Parvati got inspired to do bhakti. She made God Shiv her Guru and asked him the way to attain salvation. God Shiv explained to her that God has given the human body only for doing bhakti because in it there is arrangement for meeting God (God in form), which is not present in other living beings. God Shiv took Parvati to a secluded place where nobody could hear the knowledge and told her that sit in aasan padam (a sitting posture with back straight, right foot placed over left thigh and left foot over right thigh and both hands placed on knees), keep the merudand (backbone) straight and secure your bhanwar (mind) in the vacuum place.

He told her the way to go to Mool kamal, Swaad kamal, Naabhi kamal, Hridya kamal, Kanth kamal, Trikuti kamal and Sahnsrar kamal. Then, after that Parvati attained only proximal salvation, and will live until Shiv lives. When Kaal Niranjan (Brahm) will cause the great destruction (mahapralay), at that time, all of these will get destroyed; neither will any lok remain, nor gods. Because, all of these have not achieved complete salvation.

You (Satguru Ji) have lakhs of disciples in Haryana, Delhi, Uttar Pradesh, Rajasthan, Maharashtra, Punjab, West Bengal etc states, who after taking Satnaam Updesh from you, have given up alcohol, marijuana, smoking, meat, egg etc, and social evils like idol worship, performing shraadhs, fasting etc, baseless reverences. They, by doing jaap of Satnaam given by God Kabir, are gaining worldly pleasures and spiritual experiences. Thousands of people have got their chronic illnesses cured by coming in your refuge, and ruined families have again become prosperous.