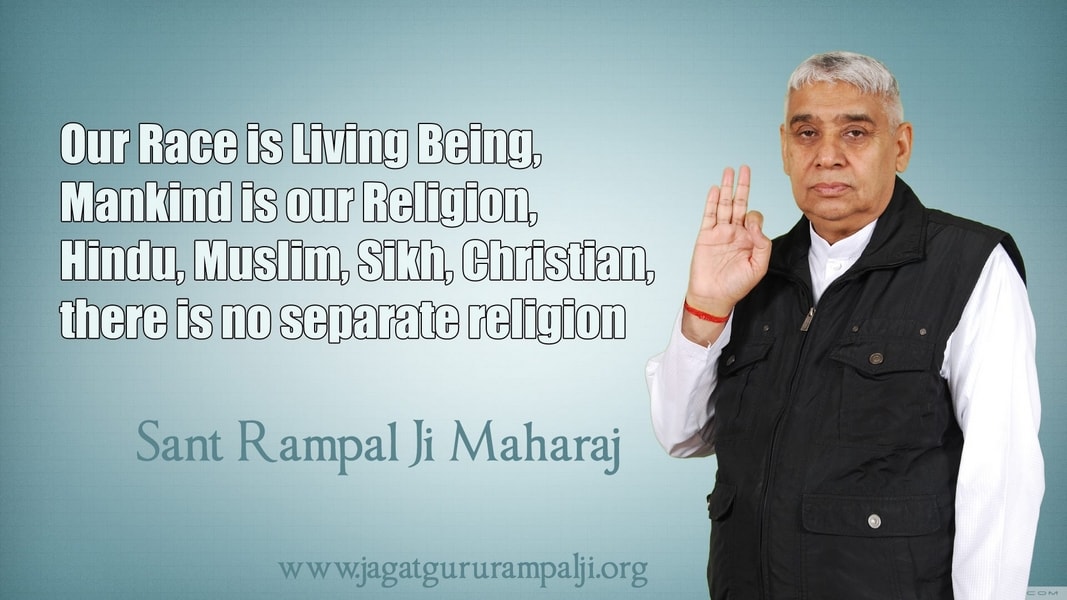 Since time immemorial, man is involved in the search of supreme peace, happiness and immortality. He has been trying according to his capability, but this desire of his is not being fulfilled. This is so because he does not have complete knowledge about the path which will fulfil his desire. All living beings want that there should be no need to work, they should get delicious food to eat, should get beautiful clothes to wear, there should be magnificent palaces to live in, beautiful parks to roam in, melodious music for entertainment, should dance-sing, play-jump, should enjoy without any restraint, and should never fall ill, should never grow old, and should never die etc-etc, but the world in which we are living, here neither is this visible anywhere, nor is possible. Because this world/lok is destructible and every thing of this lok is perishable and the king of this lok is Brahm-Kaal who eats one lakh immaterial (subtle/sukshm) bodies of human beings which are inside the material bodies of the human beings. He has captured all the living beings in the cage of the three loks by entangling them in the net of karm-bharm and sins-virtues. God Kabir says

Kaal does not want any living being to escape from this cage-like imprisonment. He also does not want a soul to know about its own home Satlok. Therefore he has misled every living being by his Trigunmayi Maya (Maya of the three gunas). Here we all have to die, all are distressed and disturbed. The state which we want to attain here, we used to live in such a state in our real home Satlok. We came here and got trapped in Kaal Brahm’s lok and forgot the way to our real home. Kabir Sahib says

There is not even a trace of peace and comfort in this Kaal Brahm’s lok. The vices of lust, anger, greed, affection, arrogance, love-hatred, joy-sorrow, profit-loss, pride-honour, born from Trigunmayi Maya, are troubling every living being. Here one living being kills and eats another living being, exploits, deprives one of honour, robs wealth and snatches away peace. Here there is fire blazing everywhere. Even if you want to live in peace, others will not let you live. Even when you do not want, a thief commits a theft, a robber commits robbery, an accident takes place, the crop of a farmer gets destroyed, the business of a business man collapses, the kingdom of a king is taken away, a healthy body gets affected by a disease; in other words, there is nothing safe here. The kingdoms of the kings, the honour of the respected, the wealth of the wealthy, the strength of the powerful, and even our bodies are suddenly snatched away. Young sons and daughters die in front of the parents, parents die leaving their breast-feeding children crying and sobbing, young sisters become widows and we are compelled to bear the mountains of sorrows. Just think that is this place worthy of living in? But we are helplessly living here because we do not see any way to get out of this cage of Kaal, and we have become used to causing grief to others and of suffering grief. Because we have forgotten our real home. That supreme peace and happiness, instead of being here, is present in our real home Satlok, where there is no birth, no death, no old age, no sorrows, no unrest, no disease, no give and take of money, do not have to pay any electricity bill, nor have to buy any means of entertainment. There everything is provided free of cost by God and is indestructible. There is evidence in the speech of Bandichhor Garibdas Ji Maharaj that —

In Satlok, there is constant supreme peace and happiness. Until we go to Satlok, we cannot attain supreme peace, happiness and immortality. It is only possible to go to Satlok if we take updesh (initiation/spiritual instruction) from a Purna Saint (Complete Saint) and keep doing bhakti of Purna Parmatma (Supreme God) throughout our life. The message which we want to convey through this book Gyan Ganga, in that, without slandering any god-goddess and religion, we have tried to tell the true path of bhakti by enlightening the profound hidden secret in all the holy religious texts, which the contemporary prominent saints, Mahants and Aacharya gurus could not understand. Kabir Sahib says in His speech that —

As a result of which the Bhakt community is suffering an infinite loss. Everyone does sadhna opposite to scriptures based on one’s own inference and as directed by the gurus. As a result of which neither do they get mental peace, nor physical comforts, nor get any profit at home or in business. Neither do they meet and see God, nor attain liberation/salvation, and to know that how can one achieve all these comforts and that who am I, from where have I come, why do I take birth, why do I die and why do I suffer?, after all, who is getting all this done and who is the Supreme God (Parmeshwar), how does He look like, where is He, and how will He be attained, and who is the mother and father of Brahma, Vishnu and Shiv, and how can we become free from Kaal Brahm’s jail and go back to our real home (Satlok). All this has been presented by means of a book Gyan Ganga so that by reading it the welfare of a common devout soul can become possible. This book is a collection of the discourses of Satguru Rampal Ji Maharaj which is based on facts. We are fully confident that a reader who will read this with interest and in an unbiased manner and will follow it, his welfare is possible.

Meaning: -  If the self-welfare of one soul is brought about by engaging him on the path of true bhakti, then one gets the fruit of crore Ashwamegh yagyas and there is no meritorious act (Dharm) equivalent to that. No task is superior to a task i.e. a service done for the salvation of a soul. Even birds and animals wander the whole day to fill their tummies. Similar is a person who does not perform any benevolent deeds. A benevolent deed - most superior service - a deed done for the welfare of living beings. By not doing benevolent tasks, all human beings die after running around like a deer in a desert, that only sees water at a distance, and on running and reaching there only finds land. Then, at a distance sees land as water. In the end that deer dies of thirst. Similarly, human beings in this Kaal lok, where we are living, desire of happiness like that deer. For example, a childless person thinks I will become happy on having a child. If you ask a person with a child, then you will get to hear a lot of their problems. A poor man thinks that if I get money, then I will become happy. If you will ask about the wellbeing of rich people, then you will get to hear loads of problems. Someone believes attainment of kingdom to be happiness. This is his biggest misconception. A king (minister, chief minister, prime minister, president) does not even have happiness in his dreams. For example, how worried the head of a family of four-five members is for the maintenance of his family. A king is the Head of a region. In its maintenance, one does not even get happiness in the dreams. Kings try to forget some of their sorrows by consuming alcohol. They accumulate wealth from the public. Then in next births, those kings, who do not do true bhakti, going in the births of animals return the revenue collected from every person by becoming their animals. Those people who being whimsical and taking initiation from fake gurus do bhakti and meritorious deed, they think that they will attain happiness in future, but on the contrary they only attain sorrow. Kabir Sahib says that this knowledge of mine is such that if one is a knowledgeable person, then on hearing this, he will absorb this in his heart, and if someone is foolish, then it is out of his understanding.