The Knowledge of Gita is Nectar 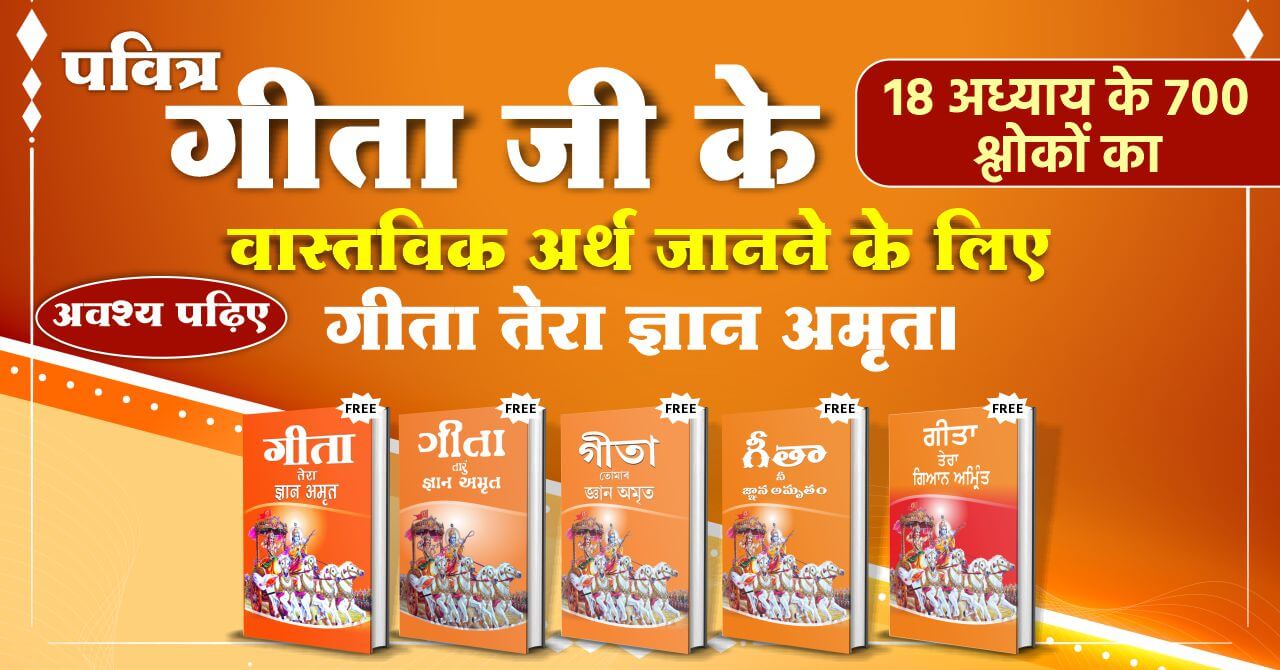 The Knowledge of Gita is Nectar | Gita Tera Gyan Amrit

“Gita” is a Holy Book which is a repository of spiritual knowledge. In the present time, it is known as a Holy Book of the Hindus. Actually, Holy Gita is a scripture of the world. It originated approximately 5550 (five thousand five hundred fifty) years ago from today, 2012, at the time of the battle of Mahabharat. At that time, there was no religion. There was only one Sanatan Panth, that is, Mankind religion. A word is indestructible. It enters the mind-like WhatsApp of those pious souls whose network is correct. It got loaded in the mind-like WhatsApp of Maharishi Vyas ji (Shri Krishna Dwaipayan). From there itself, Shri Ved Vyas ji wrote Holy “Shrimadbhagavat Gita” on paper or inscribed on the palm leaves, that is available with us today as Holy Gita. There are in total 18 (eighteen) Chapters and 700 (seven hundred) Verses in Holy Book Gita. I have taken description from this Holy Book as per requirement, and composed this Text “The Knowledge of Gita is Nectar”. Like, there are herbs in a forest. A doctor takes necessary herbs from that forest and prepares a life-giving medicine from them. The forest still exists.

Similarly, consider the book “The Knowledge of Gita is Nectar” to be a medicine, and take sips of knowledge by reading it, and get your disease of birth and death cured.

Human life is incomplete without spiritual knowledge. Even if someone has a wealth worth billions, he or she still feels there is something missing in his or her life. For its fulfilment, a person goes to tourist places. At that time, one somewhat feels good, but it cannot make the whole life good, neither is self-welfare possible from it. After two-three days, the same routine commences. Even then, there seems to be some incompleteness. That deficit is of the bhakti of God. For its fulfilment, a religious person of the world performs his or her customary religious practices. If that religious practice of that worshipper is according to the scriptures, then it will be beneficial. If abandoning the injunctions of the scriptures, one behaves arbitrarily i.e., performs wilful religious practice, then according to Gita Chapter 16 Verse 23-24, it is useless. Neither does the worshipper attain happiness, nor spiritual success or supreme salvation i.e., it is futile religious practice. Some devotees do bhakti after taking initiation from a guru. If the guru is complete, then they will get benefit; otherwise, that way of worship is also useless.

In this book “The Knowledge of Gita is Nectar”, you will come to know – which are the certified scriptures according to which one should worship? Which way of worship is in accordance with the scriptures? What is the method of doing that worship? From which Mahatma would it be obtained? What is the identity of a Complete Guru? You will read all this in this very book.

This book will unite the people of the world who being divided into religions are fighting with each other and dying. Holy Book Gita does not belong to a particular religion. It was granted for the welfare of mankind at the time when there was no religion. There was only “Mankind” religion. My slogan is: -

Our Race is Living Being, Mankind is our religion | Hindu, Muslim, Sikh, Christian, there is no separate religion ||

Like, Baba Nanak ji was born in the Holy Hindu religion in the Kshatriya (Arora) family of Shri Kaluram Mehta. Shri Nanak Dev ji understood the knowledge of Gita from Shri Brijlal Pandey, and he was doing the bhakti imparted by him. He used to worship Shri Vishnu ji and Shri Shankar ji. He also used to perform worship of all other gods that is currently prevalent in the Hindu religion. Shri Nanak ji used to work in the store of the Nawab of Sultanpur City. A River Bein used to flow approximately half a k.m. away from the city. Shri Nanak Dev ji used to every day go to bathe in that river. God meets good souls who are firm devotees. You will read more evidence in this very book. Based on that same principle, God met Shri Nanak Dev Sahib ji. He told him Tatvgyan (true and complete spiritual knowledge). He made him aware of the true way of worship which is in accordance with the scriptures. For the satisfaction of Shri Nanak Dev ji, He took him above to His (Shashvat Sthaan) Eternal Place, that is, Sachkhand. After showing around all the (brahmands) universes, and telling the true method of bhakti, He directed him to re-establish the “Sanatan Bhakti” (Eternal Bhakti). Three days later, He left Shri Nanak ji back on earth. Thereafter, Shri Nanak ji, stopping the arbitrary practice prevalent in the Hindu religion, propagated the true way of worship (True Bhakti) in accordance with the Holy Book Gita (Saptshloki Gita).

For the true worship of God, first of all, it is essential to have a “Guru”. Abiding by this, Shri Nanak ji started acquiring “Shishya” (disciple). He himself was seated on the post of Guru. The (Shishya) disciples of Shri Nanak ji are called Sikh (in Punjabi language). Due to which, they acquired a distinct identity, and a group of those followers have presently taken the form of a religion. Hindus and Sikhs fight with each other on the name of religion and die. This is due to lack of prudence.

Meaning: - Those reverent Hindus who without a guru perform arbitrary practice, it has been said to them that - 'You do not consider anyone superior to Shri Ram and Shri Krishna ji. Despite being the master of the three worlds, they acquired a guru and did bhakti, and they used to prostrate in the feet of their respective Gurudevs. {Shri Ramchandra ji’s Guru was Sage Vashisht ji and Shri Krishna ji’s Guru was Sage Durvasa ji. Sage Sandipni was Shri Krishna ji’s literacy teacher. Sage Durvasa was his spiritual (guru) teacher.} What foundation do you have that you want welfare by doing bhakti without acquiring a guru?' It is further stated in Sukshm Ved: -

In this book, you will find various other tips for bhakti and will also learn about the true knowledge and way of worship. I hope that this book will cause welfare of the humanity. It is my prayer to God that – 'O God! Make this endeavour of mine, Das, successful. All the living beings are Your children; they are Your souls. May they understand the real path of bhakti and all the human beings make their lives blessed! May there be peace in the world.'

The Knowledge of Gita is Nectar