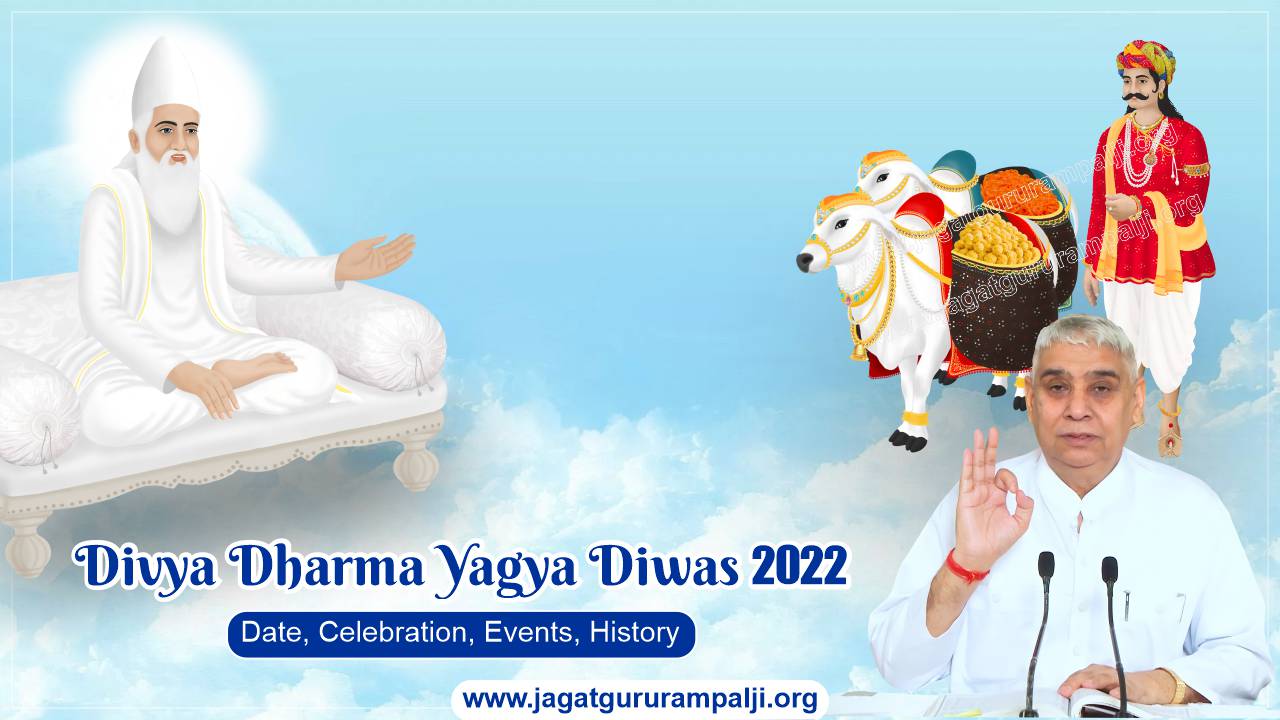 Divya Dharm Yagya Diwas 2022 (Divine Meritorius Meal Days): Whenever the topic of huge gatherings and divine community meal comes, then the discussion of the gatherings and divine community meals celebrated with great joy by Sant Rampal Ji Maharaj Ji and his followers always remains a topic of discussion among the devotee society. Similar Dharma Bhandara is currently being organized in November. When the Supreme God Kabir Saheb Ji appeared on this earth 600 years ago and provided happiness to the people by giving them Satbhakti. Then the Supreme Lord had to perform many spectacles and miracles to prove Himself to us souls. By organizing a three-day continuous Bhandara in Kashi city 18 lakh sages and great sages were served Mohan food round the clock.

For the same purpose, a three-day continuous amazing Bhandara is being organized under the guidance of Sant Rampal Ji Maharaj,  on 7,8 and 9 November 2022 in remembrance of a divine play by Kabir Saheb Ji.

Whenever the discussion about social reformers takes place, the name of Sant Rampal Ji Maharaj comes to mind first. Under the auspicious guidance of Jagatguru Tatvadarshi Sant Rampal Ji Maharaj, one such amazing program is being organized from 7th to 9th November 2022. In this huge Dharma Bhandara, for three Days continuous recitation of Amarvani of Sant Garibdas Ji Maharaj will be organized in which the whole world has been invited to join the auspicious event. Interested devotees can take advantage of this divine Dharma Yagya by attending their nearest Satlok Ashram. Live broadcast of this special program will be done through Spiritual Leader Sant Rampal Ji Maharaj's Facebook page and YouTube channel as well as Sadhana and Popcorn TV channel.

What is Divya Dharma Yagya Day and when is it?

In Vikrami Samvat 1570 (1513 AD), Kabir Parmeshwar ji organized a Bhandara for 1.8 million sages in Kashi (U.P.), which started on chaudas (fourteenth day) of Shukla Paksha of Kartik month for 3 days and completed on prathama (first day) of Krishna Paksha of Mangsar (Maghshirsha). This special day is on 7-8-9 November in the year 2022.

Where is Divya Dharma Bhandara Being Organized?

Kabir Saheb Ji, who incarnated in the form of Keshav Banjara, had organized Akhand Bhandara (Huge Feast) for three days in which 18 lakh great sages participated from various parts of India. To commemorate the same, Divya Dharma Bhandara is being organized at ten Satlok Ashrams around the country. Under the guidance of Sant Rampal Ji Maharaj Ji, this auspicious event is being organized in the following Ashrams.

This program will start on 7th November and run for three days until 9th ​​November 2022. During this, for 24 hours, continuous recitation of the Sad Granth Sahib (Amar Granth) will also be organised.

What is the History of Divya Dharma Yagya Diwas?

Divya Bhandara by God Kabir in Kashi City: About 600 years ago, when Supreme God Kabir Saheb Ji had incarnated in the holy Kashi city at that time Sikandar Lodi was the emperor of Delhi. Sikandar Lodi's Pir Shekhtaki and other religious mullahs & Qazis were extremely jealous of Kabir Ji. He promoted a false invitation letter in Kabir Ji's name all over India to defame Kabir Ji in front of Sultan Sikandar Lodi. In the invitation letter, it was written that Kabir Ji will do Bhandara (langar) for three days in Kashi. Every time a person will be fed with food and he will be given a Mohar (gold currency) and a Dohar (blanket). Seven types of sweets, kheer, puri, halwa, curd, etc. will be made in the meal. Every person coming to Bhandare will also be given Sukha Sidha as well (Ration). After receiving this invitation, saints started coming from far and wide. 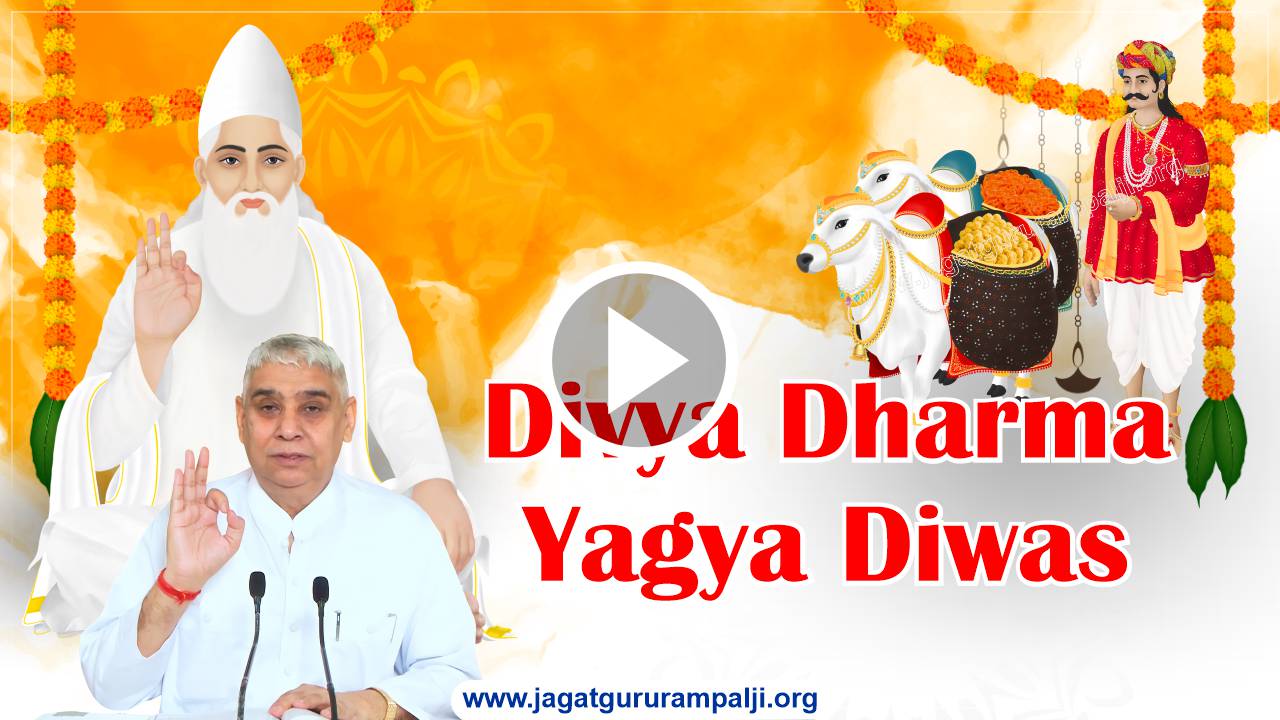 Sant Ravidas Ji informed Kabir Ji by saying that a crowd of saints had started gathering in Kashi.  Kabir Saheb is Omnipotent. He already knew everything that was happening out there in Kashi. Kabir Ji went to His supreme abode Satlok (The Eternal Place) and disguised as Keshav Banjara and came to Kashi city by placing food material on 9 lakh bullocks. Kabir Ji who had incarnated as Keshav Banjara also brought one lakh servitors with Him. Keshav, who came in the form of Banjara, organized a Divya Dharm Bhandara in Kashi City for three consecutive days. No matter how much people ate, there was no restriction, there were heaps of sweets, laddus, jalebis, rice, kheer, pudding, etc.

After some time Kabir Saheb, Sant Ravidas Ji, and King Sikandar Lodi also came to the same Bhandara. The people present in the Bhandara were astonished that it is Kabir Seth who has organized such a big religious Bhandara. God Kabir, present in both forms (Keshav and Kabir), gave true spiritual knowledge in the form of questions and answers in front of all the devotees and saints. God Kabir Ji organized a Satsang for 24 hours straight by answering the questions in the form of a discussion with Keshav. As a result, lakhs of devotees renounced their arbitrary spiritual practices and took initiation from Supreme God Kabir Saheb Ji.

Preparations for the Bhandara Already Started in Full Swing

In Kashi City, complete God Kabir Saheb organized an open Bhandara for three Days. To commemorate this, preparations are going on in full swing in 9 Satlok Ashrams by the followers of Sant Rampal Ji Maharaj. Lakhs of devotees are expected to gather in this three-Days huge Dharma Bhandara, for whose preparations have already been started in the Ashrams. Arrangements for food, accommodation and transportation are being made for those who will join the event.

Offering (Bhog) will be Delicious Sweets Made of Clarified Butter

In this Divya Dharma Bhandara, an open community meal will be organized for the saints who are expected to come in lakhs of numbers. Delicious food will be prepared in the Bhandara for the God-loving souls coming from outside in the ten Ashrams from the country which will be distributed in the form of offerings to the Supreme Lord which will be made from clarified butter (desi ghee).

Divine Meritorius Meal Days): Some special programs will be organized to commemorate the religious Bhandara which are as follows: -

What Arrangements are Being done for Devotees Coming to Samagam?

There will be lakhs of devotees in this divine Samagam. Special arrangements are being done in Ashrams to fulfil their needs like stay, food and daily requirements. Separate accommodation is being arranged for sisters and brothers so they to stay and rest comfortably. Pure drinking water, water to bathe and wash clothes is being arranged for devotees coming in this Divya Dharm Bhandara. The seekers themselves along with Sewadars are doing all arrangements.

Readers are requested to participate in this Mahadivya Bhandara and take advantage of the Satsang verses of Satgyan and share more and more information about this Divine Dharma Bhandara with your friends, family members, and relatives. To watch this Divya Dharma program live, subscribe to the "Sant Rampal Ji Maharaj" YouTube channel, and Facebook page, and for more information download the "Sant Rampal Ji Maharaj App" from Google PlayStore.

1. What is Divya Dharma Yagya Diwas?

This Diwas is celebrated throughout India by Jagatguru Tatvdarshi Sant Rampal Ji Maharaj Ji as a memory of a divine play of Lord Kabir coming in the form of Keshav Banjara to serve 18 lakh saints continuously for 3 Days in Kashi Banaras 600 years ago.

2. Who was Keshav Banjara?

This festival is being celebrated at 9 Satlok Ashram of Sant Rampal Ji Maharaj.

4. What is done on Divya Dharma Yagya Diwas?

5. When is Divya Dharma Yagya Diwas?

Divya Dharma Yagya Diwas will be observed on the 7th, 8th, and 9th of November 2022 under the guidance of Sant Rampal Ji Maharaj.