Knowledge of Satyug Saints About God As Per Durga Purana 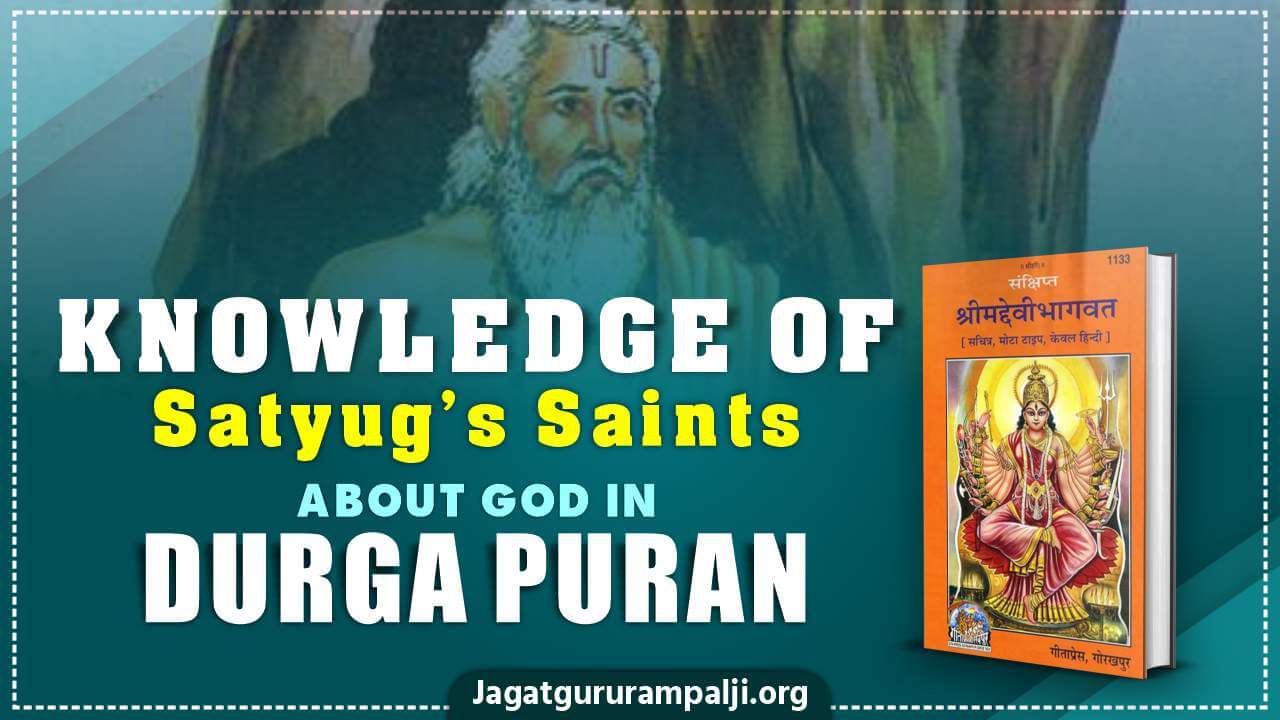 The devotee society has remained ignorant for ages about who is worshipable God who provides emancipation to souls trapped in the web of a butcher; Brahm-Kaal? The reality remains that even deities are ignorant in spite of the fact that holy scriptures provide sufficient evidence regarding; Who is Supreme God?. Contemporary Sages, great Sages, Mandaleshwars, Mahants, Acharyas, and all religious Gurus of even Satyug have not been able to provide a satisfactory answer to the devotee society as to who is worshipable God? Pious Puranas which are the personal experience of some sage/saint holds evidence of their ignorance since it contains hearsay knowledge (lokved) hence, is incomplete and incorrect.

Hindu devotees strongly believe that no one can be spiritually more powerful than Brahma, Vishnu, Mahesh (Shankar), and Goddess Durga. Each of them provides contradictory theories about who is Supreme God?. Here, in this article, we will study facts from one of the famous Durga Purana and try to understand what was the knowledge of the great saints of Satyug about God? What information does Goddess Durga provide regarding the same and what evidence do other holy scriptures provide about Supreme God?.

The following will be discussed:-

Way of Worship During Satyug

There are four Yugas (Ages) according to the belief in Hinduism which constitutes 4.32 million human years amongst which Satyuga is the first of the four Yugas also known as the Golden Era where humanity was governed by Gods. The other three Yugas are Tretayuga, Dwaparyuga, and Kalyuga. The total duration of Satyug lasts for 1,72,8000 divine years and the age of humans used to be of one-lac years. In Satyuga very virtuous souls gifted with qualities such as valiance, mightiness, intelligence, and embellished with divinity used to take birth. The son never used to die before Father. In Satyuga people used to be humble, generous, honest, and God-fearing and used to be engaged only in good, sublime deeds, and piousness. The requirements of people were obtained by the power of will since those virtuous souls were God-loving, God-fearing, and God listens to the prayers of his dearest souls.

In Satyuga just by mere contemplation seekers/devotees would beget desired results. The environment was clear/best and people hardly used to fall ill. People used to perform austerity to attain celestial bliss. The prime virtue during Satyug was the abandonment of worldly desires and attainment of God but evidence from holy books provides evidence that contemporary Sages, great Sages, Mandaleshwars, Acharyas used to preach to others the spiritual knowledge which was hearsay (Legends and Folklores), hence, incorrect and incomplete. Although they used to provide sermons basis their knowledge of Vedas but since they were not fortunate to be blessed of having a Satguru they remained ignorant about the true spiritual knowledge and could not interpret the real meaning of the hidden spiritual facts explained in Vedas which glorify the creator of the Universe, Param Akshar Purush / God Kabir Dev.

Srimad Devi Bhagavata MahaPurana mentions the true account of great saints during Satyuga who were ignorant and reveals the fact that earlier sages/saints did not have the knowledge about who is Supreme God? and therefore, used to perform devotion that was against the injunctions of scriptures, that is, used to perform unscriptural worship that was arbitrary conduct. The great ambiguity amongst saints/sages was that Goddess Durga whom they believed is the epitome of power (Shakti) is the only worshipable divine. They were ignorant about; what is the correct way of worship with which souls attain emancipation? Whom should they worship?. This write-up will provide evidence about the ignorance of contemporary sages/saints, Acharyas of Satyuga.

To proceed let us first know in brief about Goddess Durga who is the revered deity of Durga Purana.

Who is Goddess Durga?

The four-armed Goddess Durga portrayed in pictures and idols as riding on a Lion is the venerable deity of Shrimad Devi Bhagavata MahaPurana who is worshipped with great reverence amongst Hindus. The epitome of Shakti (feminine power) Durga is the wife of butcher Brahm-Kaal (owner of twenty-one universes- evidence) and mother of triple Gods, that is, Brahma, Vishnu, and Shankar (evidence in Shri Shiv Mahapurana, Markandeya Purana, Vishnu Purana, Durga Purana, and holy Shrimad Bhagwat Gita Chapter 14 Verse 3-5, etc).

Goddess Durga as portrayed in Shrimad Devi Bhagavata Mahapurana (which consists of 12 Skands (sections) and has 318 chapters) is also popular by the names such as  Shakti / Prakriti / Ashtangi / Bhavani /’Jagatjan-ni’/ Maya / Bhagwati / Tridev Jan-ni / Jagdambika / Maa Durga, etc. She is the daughter of Almighty KavirDev (evidence Sukshma Veda-Kabir Sagar) and was produced by the word power in the immortal abode ‘Satlok’ which is the residence of Satpurush/Shabad Swaroopi Ram. Expelled due to her fault along with her husband Kaal from the eternal world Sachhkhand; Goddess Durga now resides in twenty-one universes and is a partner in crime with her husband Brahm-Kaal in torturing and keeping innocent souls mislead and trapped in Trigunmayee Maya.

Let us study evidence in Durga Purana about the spiritual knowledge of great sages/saints at that time regarding who is God?.

Evidence in Durga Purana About God Knowledge of Satyug's Saints

Below evidence will highlight the spiritual caliber of great saints of Satyug and the devotee society will be able to judge how wise were the contemporary sages, saints, Acharyas, and Maharishis during Satyug on the most enduring question regarding who is Supreme God?. 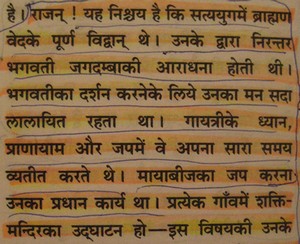 Janmajay asked- “Mahabhag, what is the nature of religion in every era, please explain the whole context specifically”.

Vyas Ji replied “King sure! In Satyug, Brahmins had complete knowledge of the Vedas. They used to worship Bhagwati Jagdambika (Goddess Durga) continuously. They always used to long for the sight of Bhagwati. Most of their time was spent in the recitation and remembrance of Gayatri. The recitation of Mayabeej was their prime duty. They had this eagerness that every village should establish a temple of Shakti, which means everywhere there should be a temple of Goddess Durga.

The Essence:- Vyas Ji is implying that Satyug Brahmins had complete knowledge of the Vedas and accordingly they used to worship Bhagwati Jagdambika. This proves that the "Great Saints" of Satyug had no knowledge about the Supreme God as Durga Ji herself talks about worshipping some other God.

Now, who is that another God whom Goddess Durga refers to is evident in the very same Durga Purana part 7 on page 562 where while giving knowledge to King Himalaya, Goddess Durga is telling to abandon even her worship and is directing to worship only one Brahm. She says his name is ‘OM’, and chants the ‘OM’ mantra. Aim to attain Brahm, with this you will prosper, and will attain him who resides in ‘Brahamlok’. She emphasizes the worship of her husband Brahm-Kaal.

Read Also: Durga's Knowledge About God According to the Durga Puran

Note: Durga's statement failed these intellectuals of Satyuga. She says to chant the mantra of Brahm, and even abandon her worship and leave everything else and these Rishis, Maharishis, Saints used to be called scholars of Vedas. They say they worship Durga, this is their level of spiritual knowledge.

Now, on the other hand, what does Brahm Kaal, the giver of the knowledge of Gita in Gita Chapter 7 Verse 18 tells that even his worship is ‘Anuttam’ (inferior) since salvation cannot be attained with his devotion and creatures remain in recurrence.

In Gita Chapter 15 Verse 5, and Chapter 18 Verse 62 Brahm tells Arjun to go in the refuge of the Supreme God to attain Supreme peace and eternal abode (Satlok).

Aforesaid, shreds of evidence indicate that neither the great saints of Satyug, nor Goddess Durga and not even Brahm-Kaal knows who is Supreme God? Brahm-Kaal tells the enlightened (Tatvadarshi) saint will tell about the correct way of worship of Param Akshar Purush/Satpurush whose identity has been told in Gita Chapter 15 Verse 1-4.

Who is Almighty Immortal Supreme God?

Gita Chapter 17 Verse 23 tells there are three words coded mantra to attain Supreme God, which is, ‘OM-Tat-Sat’ which only a Tatvadarshi Sant provides. Chanting this till the last breath after obtaining from the true spiritual leader and by remaining in the rules of worship the seeker attains emancipation. Param Akshar Purush/Akal Purush is KavirDev who resides in ‘Dhulok’ which is the third region of the immortal abode Satlok. Seekers who do true worship attain Satpurush and get permanent relief from the vicious cycle of birth and rebirth.

Ignorant great Sages, Saints of Satyug and all disciples of pious Hindu religion have been reading Durga Purana which is in Sanskrit as well as in Hindi since ages but remained ignorant about who is God? It is only Jagatguru Tatvadarshi Saint Rampal Ji Maharaj who has untangled hidden spiritual facts from holy scriptures and revealed the fact that the earlier great saints, Mandaleshwars, and even divinities including Goddess Durga and Brahm-Kaal did not have true spiritual knowledge hence, remained ignorant. God Kabir is the only worshipable God. Including pious Durga Purana, all holy books provide evidence of the same.